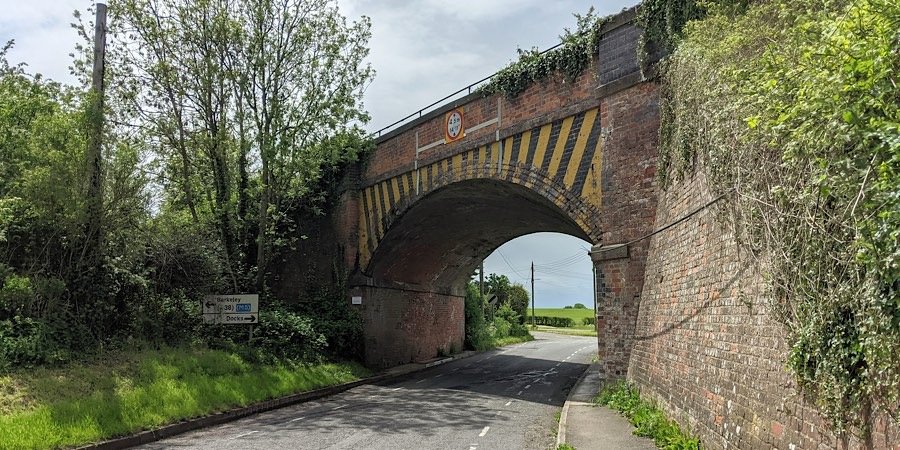 The Local Plan has thankfully recognised some potential problems of building a huge new build town around Berkeley and Sharpness.

There are infrastructure problems.  There is no close motorway junction for the M5 and it is not possible to build one either.  The roads around here are typically rural, narrow and not exactly well maintained, potholes being a persistent problem for residents.

The answer, according to Stroud District Council and the developers, is to magically connect the old railway line that runs from Sharpness and north of Berkeley to the main line up to Gloucester.  Then TA-DAAH! you have a whopping great bit of infrastructure that combats all the potential problems that building a town in the middle of nowhere throws up.

The main issue with this solution however is that it simply ISN’T GOING TO HAPPEN.  The plan that Stroud say they have come up with to make this happen is first to apply to a government fund called “Restoring Your Railway Fund”.

This fund does not have a huge amount of money behind it, and really any infrastructure fund needs have a lot of money in it to make any sort of meaningful impact.  In fact there is so little money in the fund that a rough calculation estimates it would probably manage to pay for the reinstatement of only about 22 miles of railway track!

The fund has been used to partially fund projects that have been shown to have demand and be viable, for example the railway at Portishead which has been going on for years and years and is now running at a cost of £116m.

However, despite the lack of demand or viability for rebuilding a passenger line to connect ‘the developers new build town in the middle of nowhere’ to the main line – with only a northbound being possible remember – they applied to the Restoring Your Railway Fund.

Their first application was refused.  They have apparently got another application in, so technically they can say the application is being considered and hasn’t been refused.  However, given the lack of money and the total lack of need or viability, it is impossible to imagine this application will be successful.

It is confusing to me that Stroud District Council would be interested in spending the time, effort and money reinstating a passenger railway line to Sharpness when there are areas within the district that are far less connected and could be argued as needing the infrastructure.  It seems to me that the proposed railway link is something that sounds great in a Local Plan and looks great in the developer’s brochure but has absolutely no bearing in reality.

It would be really interesting to find out which committees this proposal to reinstate the railway was presented to, and who debated it.  I wonder who commissioned the railway expert to help with the application to the Restoring Your Railway Fund.  I also wonder how this could have been authorised given the glaringly obvious lack of need or viability.

What the railway WOULD do is service a new build town.  It would increase the prospect of selling more houses and help bolster the demand for the many thousands of new build homes here.  Hmmm, I wonder who might be driving all this talk of a shiny new railway…?

I find it astonishing that the Local Plan can appear as it currently does with a railway line beautifully drawn onto the map when there is absolutely no signs at all that it will happen.  I find it sad and frustrating that we are led to believe something that has not been agreed or even discussed in any depth.  People here are being led to believe something that isn’t true and this, in my opinion, is just downright lying.

The inclusion of a shiny newly connected railway in Stroud District Council’s Local Plan is a reason, among many, that the independent planning inspectorate needs to reject it.

There are two very short railway walks created by Berkeley Byways and published on this website.